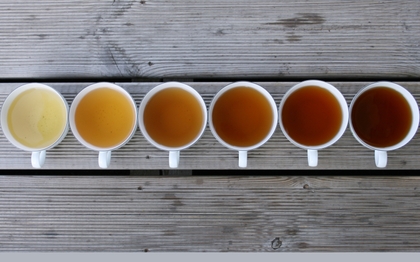 “Prince Dharma was touched by Divine grace and went out to preach the teachings of Buddha in China. To make himself worthy of such a mission, he vowed never to sleep during the nine years of his journey. Towards the end of the third year, however, he was overcome by drowsiness and was about to fall asleep when by chance he plucked a few leaves from a wild tea plant and began to chew them. The stimulating qualities of tea immediately had their effect; Dharma felt much more alert and thereafter attributed the strength he found to stay awake during the six remaining years of his apostolic mission to these leaves.” 1

Thus goes the Indian legend surrounding the origins of tea. Tea, founded in China, has been around since 2737 BC. During the Tang Dynasty (618-907 AD) tea drinking became an art form and a refined part of everyday life. During this time, a man who grew up in a monastery, Lu Yu, wrote The Book of Tea, the most prominent and influential book in Chinese tea culture. Lu Yu transcribed a “detailed account of ways to cultivate and prepare tea, tea drinking customs, the best water for tea brewing and different classifications of tea.” 2  Also during this century, tea spread to Japan, where only the rich and monks imbibed for medicinal purposes. The monks drank the tea in order to stay awake for long meditations, which explains why tea is so closely associated to Zen Buddhism. 3 As the practice of tea drinking spread from the nobles and monks in Japan to the common people, it simultaneously spread across Asia. Tea then arrived in Europe in the 17th century. And, finally, reached the “New World” on the ships of English and Dutch settlers, where it was so impactful that it altered our country’s history. Today, tea is now the most popular beverage in the world after water, with 15,000 cups drank every second.  1

I won’t tell you not to get your morning cup of joe for obvious reasons, but I will tell you some compelling facts about tea’s many benefits that go far beyond the realm of a caffeinated boost. Here are just the top five reasons why I think more students should consider consuming this aromatic beverage.

Researchers at the University of Basel in Switzerland found that consuming green tea enhances memory. The researchers divided participants into two groups. One group was given green tea (27.5 grams of green tea extract in a beverage) and the other was given a placebo. Neither groups knew what drink they were given. The researchers “found that participants who drank the beverage containing green tea extract performed better on the memory tasks” due to a “distinctly different activation pattern between their frontal and parietal lobes.” 5 Researchers believe green tea could aid in treating cognitive impairment disorders such as dementia. 5

Green and white tea contain high amounts of L-theanine, an amino acid found in tea plants. L-theanine, with the help of  caffeine, boosts concentration and alertness. 7

Tea can help us balance the damage we do to our liver from drinking alcohol. Research from Japan shows, “tea is a powerful antidote to the effects of alcohol” due to theanine that “accelerates the breakdown of acetaldehyde” which is a toxic byproduct of alcohol breakdown. Theanine also “blocks toxic radicals,” that our bodies produce when breaking down alcohol.

In simpler terms, theanine accelerates the removal of alcohol from our body. 8 I suggest trying dandelion root tea for a thorough liver detox.

A study by University College London researchers found “that people who drank tea were able to de-stress more quickly than those who drank a fake tea substitute.”9 Moreover, they found that those who drank “a black tea concoction four times a day for six weeks – were found to have lower levels of the stress hormone cortisol in their blood after a stressful event, compared with a control group who drank the fake or placebo tea for the same period of time.” Drinking green tea has similar results due to the polyphenols in green tea which reduce stress levels and the damaging impacts stress has on brain, “while increasing levels of calming chemicals in the body.” 10

Proceedings of the National Academy of Sciences published a study that found how substances in tea boosts the body’s immunity by fighting off infections. Many habits that college students engage in can lead to a weakened immune system such as sleep deprivation, stress, and living situations. 13

This study found that:

“This latest study shows how chemicals—known as alkylamines—which are commonly present in tea (as well as wine, apples, mushrooms, and other sources), are also present in some bacteria, cancerous cells, parasites, fungi, and other disease-causing agents. Drinking tea may be able to prime the body’s immune system against these agents, by teaching disease-fighter immune cells to recognize and remember alkylamines.” 13

To learn 13 MORE reasons why drinking tea is good for you, read Time Magazine’s article here.

My own experience drinking tea is the inspiration behind this article. As I huddled up next to my computer brainstorming about what to write about, I took a slow sip of my hot tea. As the aromas wafted into my nose and the tea dripped down my throat, warming my insides, I immediately felt at ease. I thought about how drinking tea has changed the way I work and relax. Now, here I am, hoping it can have the same effect on you.

One thought on “Tea Time: 6 Reasons Why Students Should Drink More Tea”